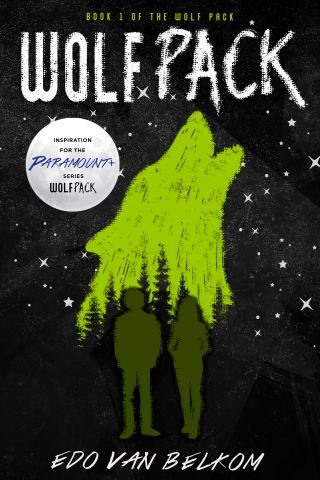 Winner of the prestigious Aurora Award and Silver Birch Award, Wolf Pack is the inspiration for the highly anticipated original series coming to Paramount+

Nothing gets between a wolf and its pack…

Most of the time, Noble, Argus, Harlan and Tora are like any other teenagers. Prowling the halls of their high school in search of new crushes and true friendships, all while trying to keep up their grades. Except these teens are anything but ordinary…

Discovered as wolf cubs in the wilderness of Redstone Forest, the pack knows their adoptive parents are the only humans they can trust with their shape-shifting secret. So whenever the siblings want to wolf around, they race to the forest to run—and relish their special bond. Until the terrible day a TV crew films their shocking transformation—and Tora is captured by a scientist determined to reveal her supernatural abilities to the world.

Now the brothers will do anything to get their sister back. Even if it means taking their powers to a whole new level by becoming werewolves for the very first time--something their parents warned them never to attempt. But once the teens go to the dark side, will they ever make it back to the only life they’ve ever known?

“[A] great book to recommend to reluctant readers. ... WOLF PACK is a winner of the Aurora Award, Canada’s highest award for achievements in the fields of science fiction and fantasy. Recommended for YA and school library collections.” — Monster Librarian

Edo van Belkom: Bram Stoker and Aurora Award winner Edo van Belkom is the author of two hundred stories of horror, science fiction, fantasy, and mystery, which have appeared in such magazines and anthologies as Storyteller, RPM for Truckers, Year’s Best Horror Stories, and The Mammoth Book of On the Road. He is also the author of “Mark Dalton: Owner/Operator,” an ongoing adventure serial about a private investigator turned trucker that has been published continuously in the monthly trade magazine Truck News since June of 1999. His more than twenty books to date include the novels Scream Queen, Martyrs, and Teeth and the short story collections Death Drives a Semi and Six-Inch Spikes. Born in Toronto in 1962, Edo worked as a daily newspaper sports and police reporter for five years before becoming a full-time freelance writer in 1992. He lives in Brampton, Ontario, with his wife, Roberta, and son, Luke.