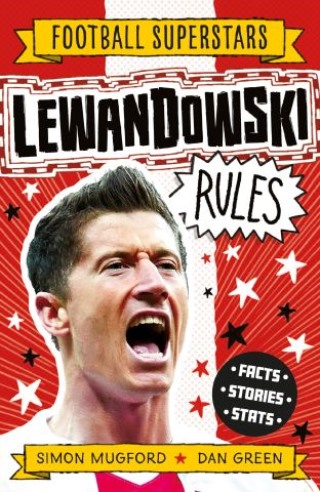 Is Poland's premier striker Robert Lewandowski your ultimate football hero? One of the best strikers of all time, he has netted more than 500 senior career goals for club and country in his career.

He has been named to the UEFA Team of the Year twice and the UEFA Champions League Squad of the Season four times and is the third highest goalscorer in the history of the competition.

Discover how Lewandowski was always destined for a career in sport, coming from a family in which his father was a Polish judo champion, and also played football for Hutnik Warsaw in the second division, while his mother was a volleyball player. But no one knew back then that Robert would become a world beater!

Football Superstars is a series aimed at building a love of reading from a young age, with fun cartoons, inspirational stories, a simple narrative style and a cast of characters chipping in with quotes, jokes and comments.

Simon Mugford: After studying the history of everything at Goldsmiths College, Simon worked at the Science Museum making paper aeroplanes and setting fire to hydrogen balloons. Despite being a fully grown man, his favourite subjects include dinosaurs, robots, rockets, loud music and Star Wars. An Ipswich Town fan since they won the FA Cup in 1978 (it's true – look it up) he lives in Kent with his wife, daughter, and a cat with two names.